Peaches: the Fuzzy One

It’s 2020 and things are not always as they seem. For instance, Georgia and their peaches are not as inseparable as one might imagine.  It may be a compliment to call a young woman a “Georgia Peach,” but it wasn’t until I began researching the fuzzy fruit for this article that I learned the peach is neither the most important crop to Georgia, nor is Georgia the largest peach producer. It seems Georgia claimed the peach for itself during a rebranding effort by state officials to move away from its association as a cotton state.

Still, the Peach State is not subtle about its favorite fruit, for decades the peach has been featured prominently on the state’s license plates and in the lyrics of country fan’s favorite songs. What Georgia lacks in quantity, they more than make up for in the quality of their peaches, which are notoriously juicy and sweet.

There are three commonly farmed types of peaches in the U.S.: clingstone, semi-freestone, and freestone. As you can probably deduce from the names, the distinctions regard the degree to which the flesh clings to the stone, also referred to as the pit.

Peaches origins can be traced to China. Over time they began widely circulating throughout Europe and the Mediterranean, before making their way to the New World as early as 1600.

Peach trees enjoy full sun and require warm temperatures to bear fruit. However, they also require chilling houses to induce the flowering (approximately 600 chilling hours for low-chill varieties and 900 for the higher chilling types). Specific varieties are even grown in tropical climates, such as South Florida, to expand the harvesting season. Peach trees are self-pollinating. Therefore, growers tend to space tree plantings of the same cultivar in close proximity.

Peach movement is on the decline despite the fruit’s low-calorie, antioxidant value proposition. It’s among only a few produce items that have a declining consumption, reducing -3.1% annually from year 2000 to 2019. Experts attribute the decline to competition from Mangoes, and the quality challenges of delivering fruit at its peak freshness. 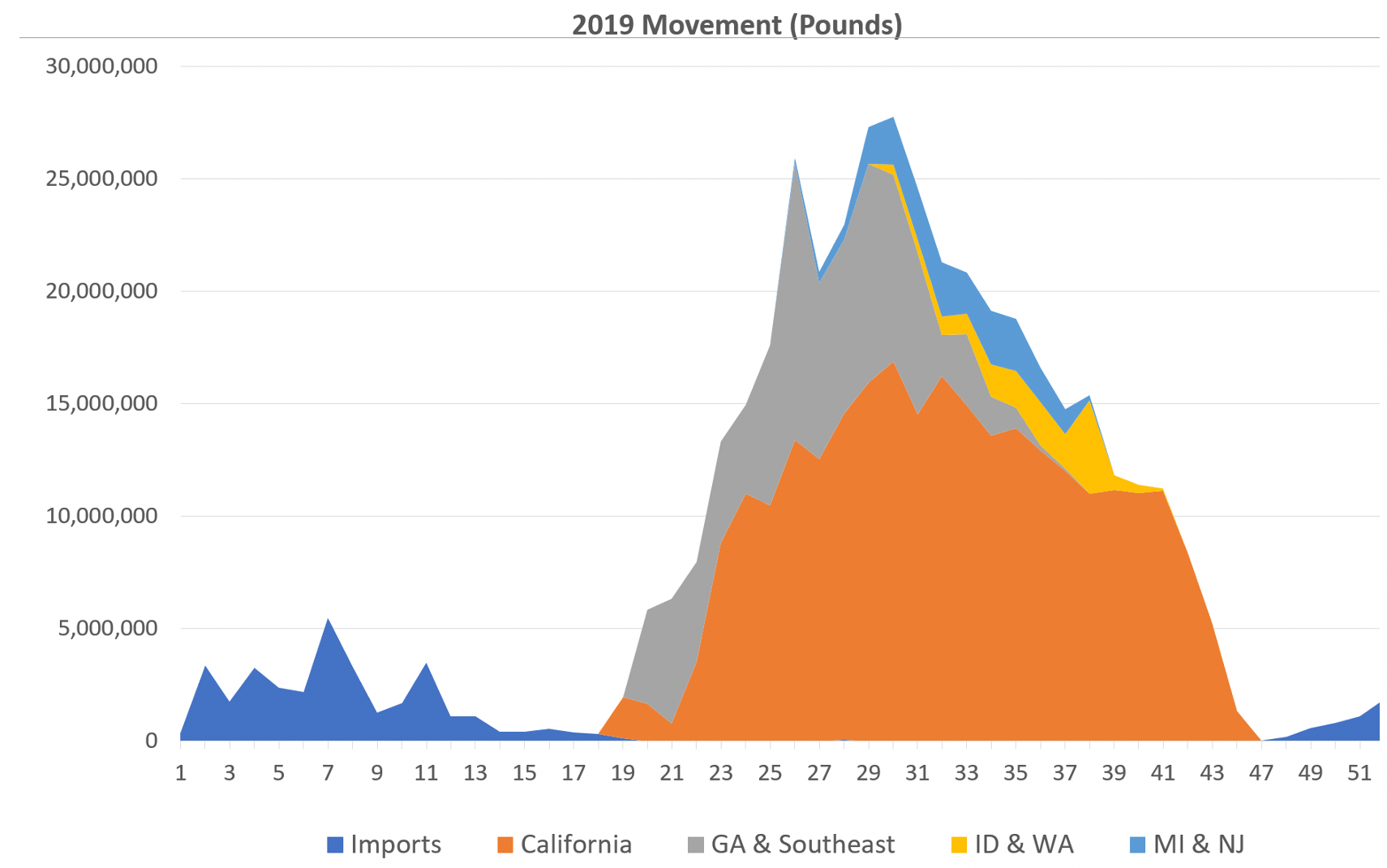 Like with many of the commodities in our produce marketplace, California is responsible for the bulk of the product destined for domestic consumption; more than 60% of 2019’s crop came from California. Despite the strength of the Georgia peach brand, less than 5% of 2019’s crop hailed from the Goober state. South Carolina is the second largest peach producing region in the U.S., totaling 15% of 2019 movement. All other regions are minor produces (less than 2%), while imports accounted for 8%.

This year, there was a peach recall due to an outbreak of salmonella that spanned from August to mid-October. The CDC attributed the outbreak to having 28 hospitalizations and no deaths.

The bulk of the domestic peach crop trades within a narrow band. Imports in the first nine weeks of the year, when there is no domestic crop, can command well above-average prices. Select harvests are able to command hefty premiums during the domestic growing season. For those growers who don’t know whether their crop can also command a premium, we invite you to check-out the ProduceIQ’s trading platform.

Elasticity – a Tale of Two Seasons 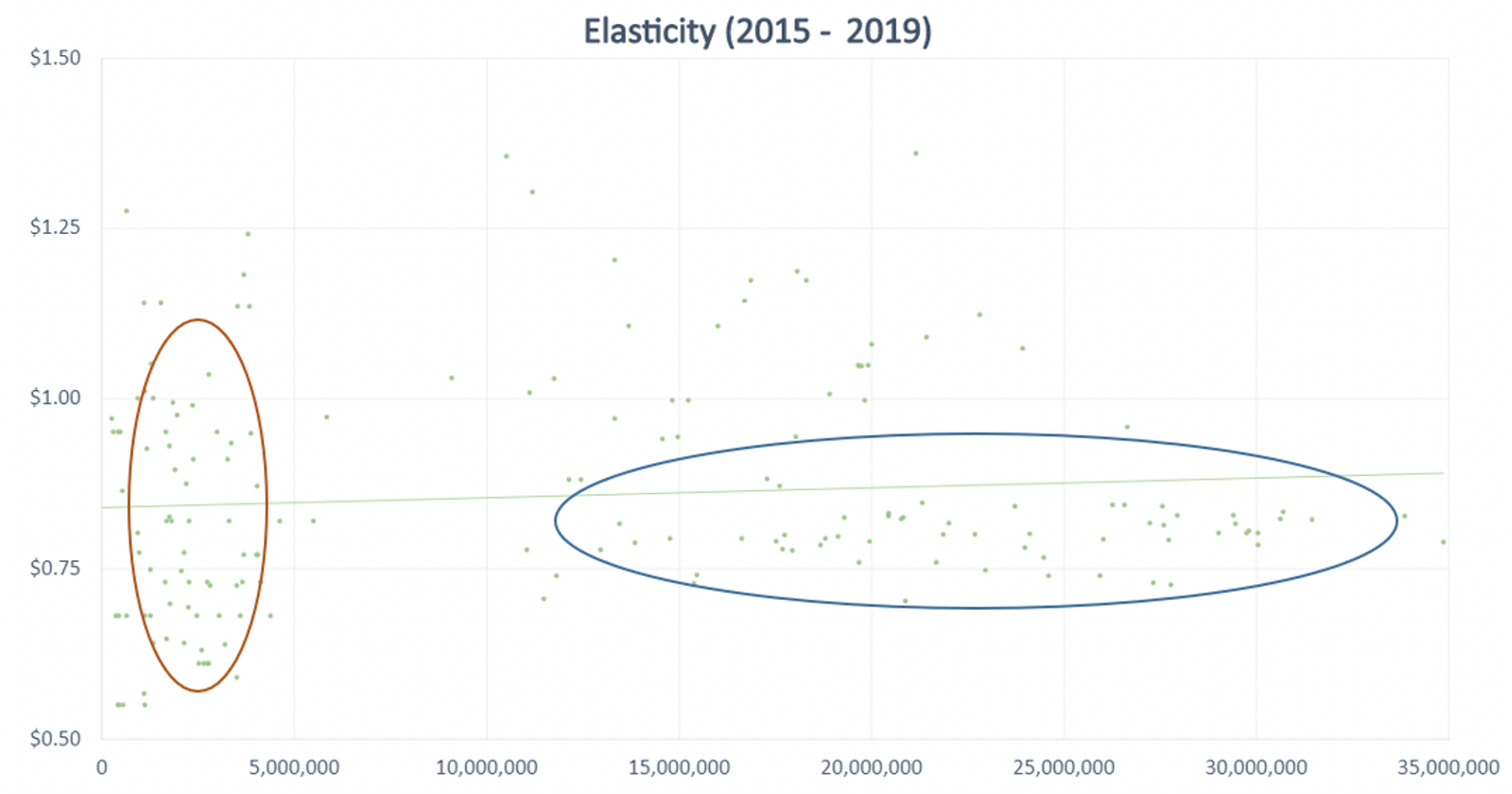 The Elasticity chart for peaches is a tale of two seasons. The vertical ellipse is comprised of peach prices for weeks 1-9. The lucky recipients of these high-priced winter peaches are foreign growers (excluding Mexico). Chile is the largest South American grower of peaches. Mexico exports a negligible peach quantity in the spring. Higher prices are likely warranted to cover the increased cost of freight.

The Elasticity chart indicates inelastic demand for peaches in the first nine weeks of the year. Non-U.S. growers of peaches would strongly benefit from a digital produce marketplace where they can become visible to those buyers willing to pay top dollar for their crop.

When peaches are domestically in-season, the bulk of the commodity trades within a narrow price band. There are, however, very notable pricing exceptions.

In this article: Peaches